It was almost 3 months since I had gone for any trek/ trip last (i.e. trip to Ooty, not counting the half-day trek to Savandurga) – which is almost the maximum period I could survive without feeding any more adventures to my body. I knew I had to go somewhere that weekend to continue to stay sane. I wanted to go for a trek, and I had never visited Kerala. So some research and I had shortlisted 4 treks in Kerala – Meesapulimala, Chokramudi, Paithalmala & Chembra Peak. The first two were becoming too expensive for a solo trek, while Chembra Peak was closed due to the forest fire – hence on Friday afternoon, I finally decided to go for Paithalmala Trek.

I boarded the KSRTC bus from Bangalore on Friday night to reach Iritty early morning next day. Iritty to Payyavoor, Payyavoor to Kudiyanmala, and finally from there to Paithalmala, it took 4 buses to reach there.

Soon after I boarded the last bus from Kudiyanmala to Paithalmala – I could see waterfalls every now and then, dense green forest all around with beautiful narrow roads in an extremely secluded environment. I was convinced the next 2 days were going to be amazing. Monsoon is considered the best time to visit Paithalmala.

As the bus was climbing up the hills, I saw a group of people running with bibs on the way – seems there was some marathon organized there that day. I usually try to participate in marathons in hill-stations and travel specifically for that – I cursed myself for not researching enough to find about the marathon earlier. I wished I could get down from the bus and join the run, I decided I’ll make up for it and run there next morning.

The bus finally reached Paithalmala at around 10 am, and it was consistently raining cats and dogs. I stepped down from the bus to be blown away by the weather and greenery around. I felt like just wandering around and enjoying the weather, though with a heavy backpack and rains pouring, I needed to go and get rid of my bag first. I had booked a dormitory in a resort called Paithal Hill Resort. There was another group of 7 girls in the bus, who had also came there for the trek. They knew the direction, so I decided to just tag along with them. Though I soon realized it was getting too difficult to walk slow enough to the pace of the girl gang, so I just went ahead and reached my resort after a beautiful 2-3 km walk. 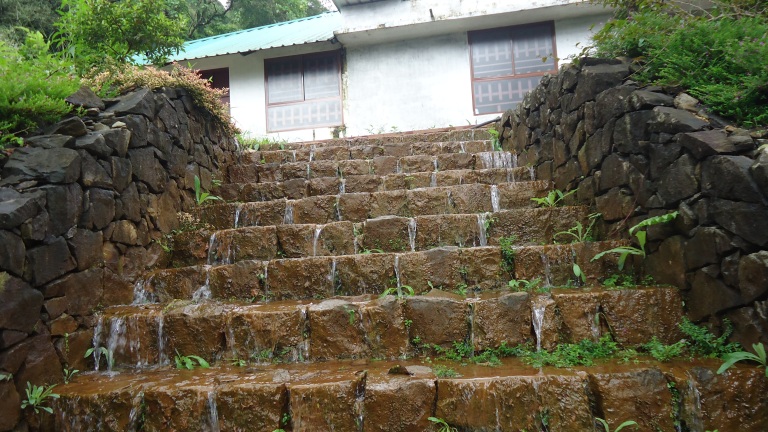 It was raining heavily even while I reach the resort. I decided to relax and enjoy the rains, hoping it will stop after a while – though it was showing no signs of stopping. I finally started the trek at around 2 pm by when the rain had slowed down.

The starting point of the trek was around a km from the resort I was staying at. I had to get the pass from the local security, who guided me about the route and also advised to be protected from leaches. I was carrying a packet of salt with me, and I applied it to my legs and shoes and started the trek.

The initial 4 km of the trek was supposed to be a forest trail, followed by some plain land and then a watch observatory and then the final viewpoint (called Suicide Point, not sure about the history of the name). Around a km further into the trek and I bumped into that girl gang again. The remaining 3 km of the trail went chit-chatting with them – they were all fashion design students from Kannur itself. The trail was pretty simple but beautiful, and the rains and frequent waterfalls made it even better. 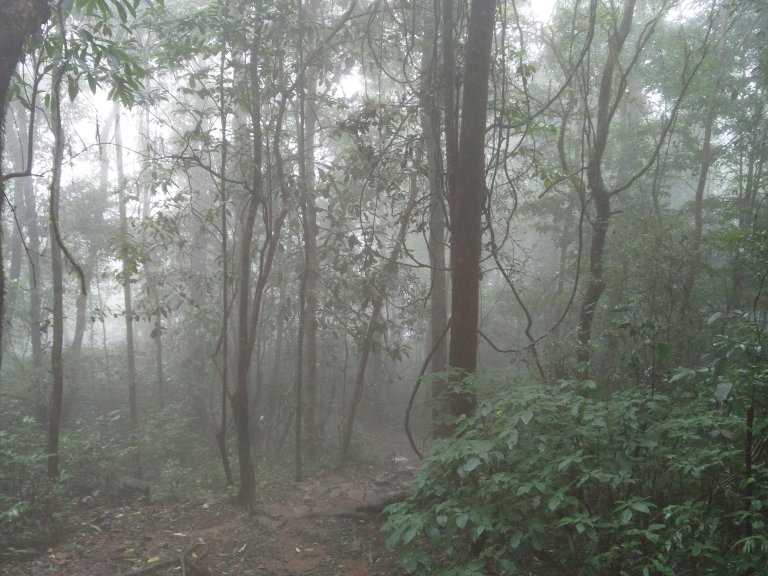 After the forest trail, while the gang decided to take a break – I went further and reached the watch observatory which offered a good panoramic view of the surrounding villages, hills and forests. The rains had stopped and winds were blowing hard, which made the environment surreal. After enjoying the seclusion for a while, I went down further to reach the Suicide Point. It was all foggy and not much was visible earlier – it just looked like a valley. Though occasionally the fogs were moving and I could see a mountain range down from there, which perhaps was Thadiyandamol ranges in Coorg. Soon, another group of 2 trekkers reached there, and this meant I no longer had to rely on selfies alone for capturing pics. We spend some time at the Suicide Point enjoying the view, and also trying different poses from different positions. 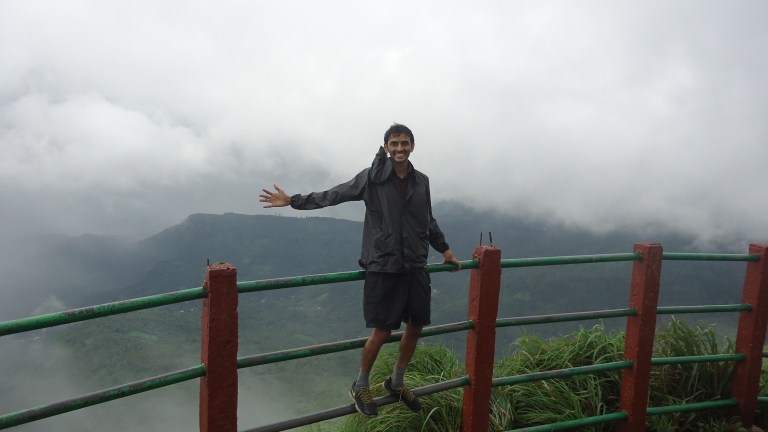 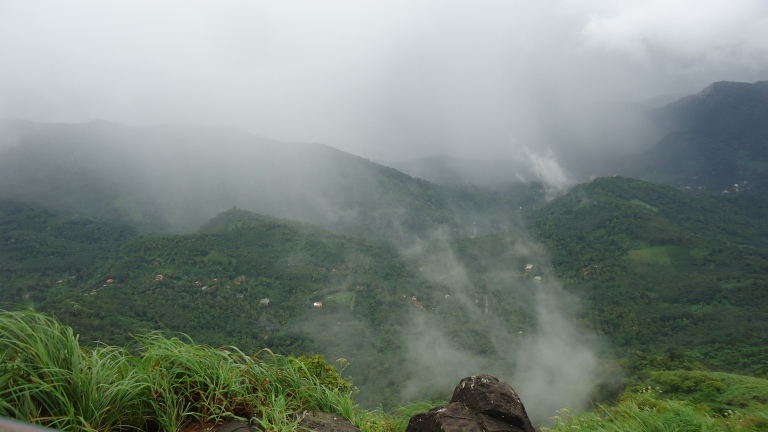 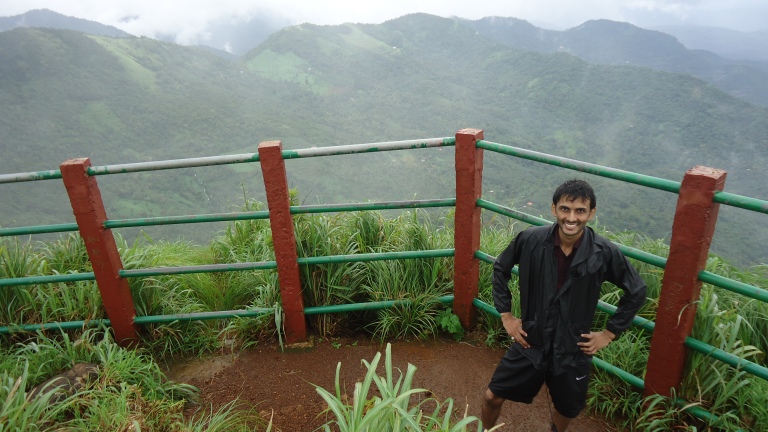 After around half an hour, we decided to head back. We came back from trek by around 5:30 pm. The other 2 newly made friends were teachers in a school in Kerala itself and were heading back the same day. I took leave from them and came back to my resort. 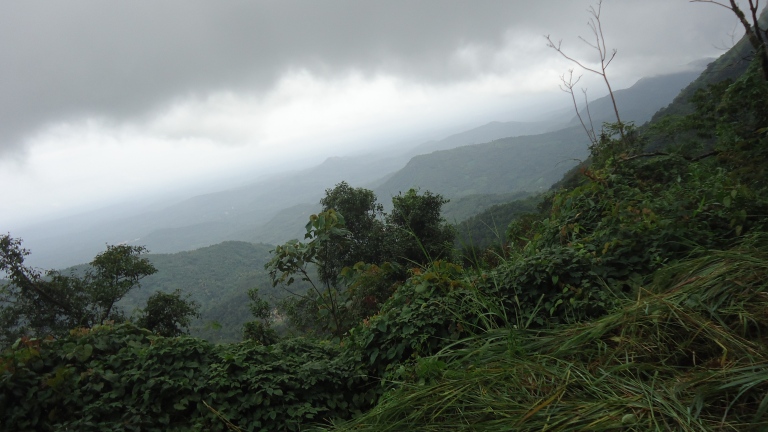 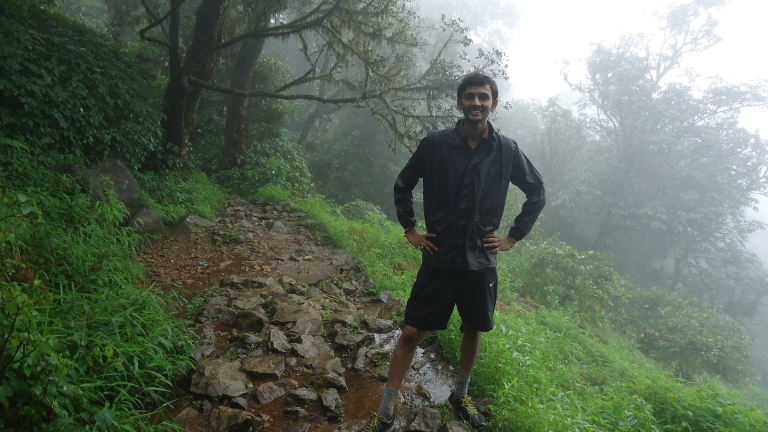 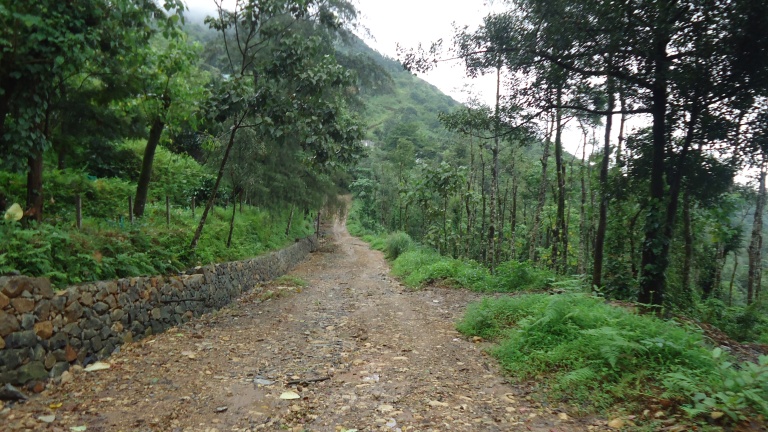 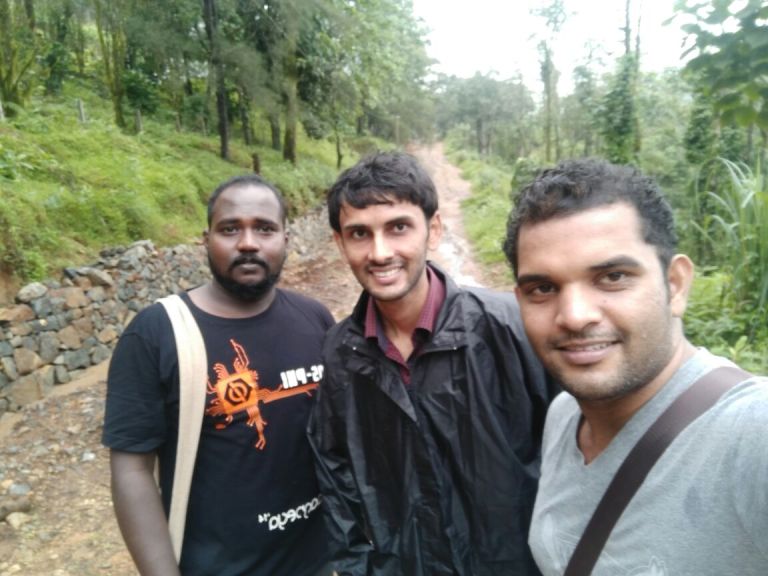 One more person had come in at the dorm – he was a botanist and had come there for his research. We spent rest of the evening enjoying the rains and discussing each other’s’ lives.

I woke up next morning lazily at around 8 (while the plan was to wake up at 6 and go for a run). The weather was still beautiful with no sun and I decided to go for the run anyways. My shoes were still wet, so I just put my headphones and decided to run barefoot.

I was running downhill and was almost at a pace of 3 min per km initially coz of the downslope. Narrow beautiful hilly terrain, rocks on one side – valley on another side, empty road with a mesmerizing view – it was making the run an unforgettable experience. To top it all, it started raining again. Rain, hills, breathtaking views while running with beautiful music on the ears and no one around – I didn’t realize when I transitioned from running to dancing. I was dancing my heart out to the tunes of every beat. Not sure if it was coincidence or the Wynk app was syncing with the climate to play all the relevant songs – ‘Aaj blue hai pani pani” to “Just do that, do that, do that, do that – Paani wala dance”. The music was full on with my phone turning in auto DJ mode – I don’t remember when the last time I had danced so frantically. Every occasional passing-by bus, car was waving and smiling at me and my dance. Best part, one of the bike passing by, actually stopped and both of them joined me in the dance. This was totally filmy – except that everything was happening in real. I was totally in love with everything – it just couldn’t get any better.

After some 2 hours of non-stop dance and being observed by every local and passer-by for my dance moves, I finally decided to walk back once the rain had stopped. One of the locals asked me in a serious tone what I was upto and if I was drunk. I ignored him and came back, later realized the context of his question as alcohol is banned in Kerala. Dancing gets me high – and I was too high at that moment, literally and figuratively. 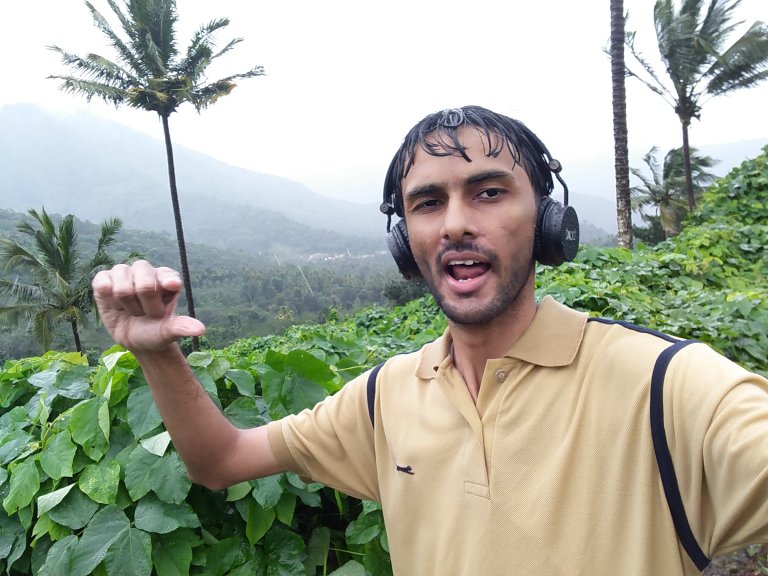 After returning back the resort, I decided to enjoy the luxuries of the resort and used the swimming pool. 2 hours of non-stop dance with my feets striking hard at the hilly roads had resulted in blisters in my feets – and I was barely able to walk.

I had earlier planned to go Kanjirakolly or other beaches in Kannur later in the day, though the blisters and the rains made me just take a chill pill and relax in the resort itself till evening. 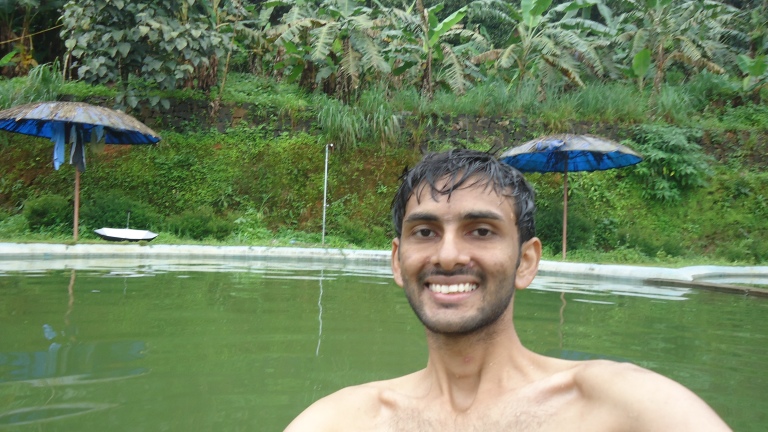 I left the resort in the evening to take the bus to Kannur from where I had to catch the bus back to Bangalore. As I was walking back to the bus stop, many passers-by were waving me bye. Even as I boarded the bus, some of the locals were greeting me, fondly asking me if I am returning today. My rain dance had perhaps made me the poster boy of the village, with new friends I did not know names of. It had also unveiled that bindas care-free side of me which often gets suppressed as I get busy in my other adventures of running an online hotel booking business (oops, movement 🙂 ). The two days were, indeed, amazing! 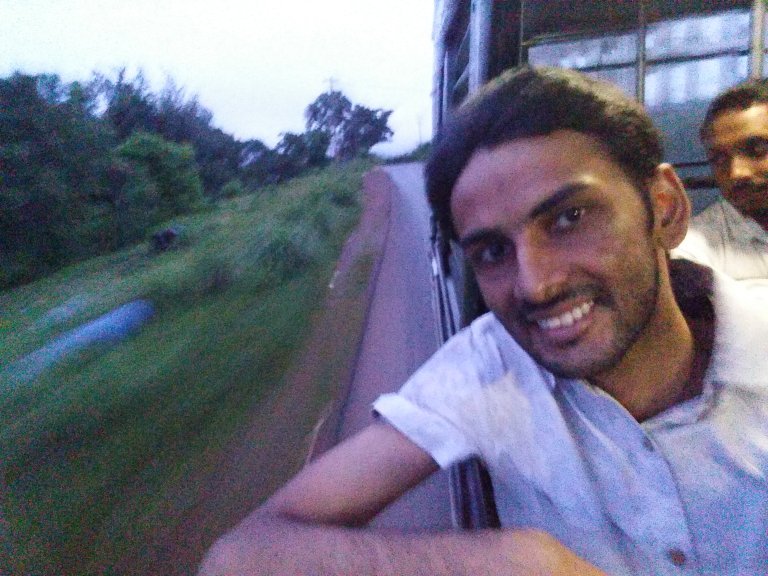 One thought on “Paithalmala Trek”